Title: Goosebumps Live On Stage – Screams In The Night, a.k.a. “Hello, Slappy!”

Author: R.L. Stine (Based on stage play by Rupert Holmes)

Time for another long lost Goosebumps treasure, though this one’s slightly better known than “Haunted Library” and “Surprise on the 13th Floor.”

In the late 90s there was briefly a Goosebumps stage show, though I was barely aware of this since I was like 8 or 9 at the time. I’ve never seen a performance, and I don’t know how long the show ran. Hell, I’m not even sure how I got this book. I think it originally belonged to my sibling back in elementary school, but like so much of their shit, it ended up in my possession because they stopped caring about it.

There are four stories in this book, a wraparound tale and three short stories that feature the same cast of characters. The first and third stories are weird, the first coming across like a rehash of “Stay Out of the Basement” and the third some prototype for the “Goosebumps Horrorland” series. I prefer the second story out of the bunch.

The book came with some illustrations by Tim Jacobus. Unfortunately, due to the size and spine of the book I’m unable to make scans without doing serious damage.

[Wing: I’m still boggling over it getting a stage show. What I wouldn’t give to see it today!]

A rather prolific author, Peter Lerangis has been writing for decades, although if you go to his website the farthest back you’ll find is his The Watchers series. No mention of his Point Horror writing that I can find. Seriously. Not even his Wiki page goes beyond his Watchers series. Don’t worry. I believe I’ve found them. Titles include DRIVER’S DEAD, THE YEARBOOK, and X-ISLE. Seems like he doesn’t want the taint, maybe? Or it’s just that his various other series have done so well there’s no need to put that retail work on his resume any longer. [Wing: Those the books I’ve found by him, too (with X-Isle being a two book series). He also ghostwrote some of the Baby-Sitters Club books.]

Anyway, he has a weird thing for the Vietnam War in this book, and I don’t know why. The premise seems to hinge on a “crazy” Vietnam vet and one of the characters being a refugee from the area and trying to find his parents. It’s just the date seems really off. The book was published in 1994. That’s a big, lingering gap for Vietnam relevance. It was just weird. It didn’t necessarily seem forced, but the timing was off enough that it really stood out.

Also every. Single. Chapter. Ends on a cliffhanger. All of them.

Kristen’s not a very good driver. And the driver’s ed classes aren’t helping. No matter how hard she tries, she just can’t get the hang of being behind the wheel.

Rob’s a very good driver. And he wants to give Kirsten a few tips on how to improve her driving. But after the first session, Rob turns up missing.

Kirsten is beginning to realize that this class may be a little more than she bargained for. A class that may drive her crazy – or to death.

That is . . . Really bad. One, it’s vaguely relevant to the plot. It just leaves out a whole shit ton of applicable details like Rob being a shitbag, the fact that he doesn’t turn up missing, but dead, and the story actually doesn’t center around the class itself. Driver’s ed precipitates a lot of the events, but the class is really more of a passing thing. The contest is really the driving force behind this (pun intended), along with, you know. Being haunted by a dead kid that’s screwing with her head.

Title: The Eye of the Behoder

Summary: Led by a cowardly knight named Sir John, the children must seek and destroy an evil monster known as The Beholder to find a gateway back to their own world.

Oooh, exciting! The Beholder is a classic DnD monster. For those not in the know, it’s basically a massive eyeball and chompy mouth with snakey tentacles coming off it. Here’s a classic image:

Pretty much a hulked-out Mike Wazowski.

I’m sure that the Dungeons and Dragons cartoon series will show this stellar enemy in a rightfully respectful light.

I HATE THIS SERIES.

[Dove: I love this series. And even I want to kick the writers quite often.]

END_OF_DOCUMENT_TOKEN_TO_BE_REPLACED

Continue reading "Dungeons & Dragons 2: The Eye of the Beholder"

Summary: Spending Christmas at Kirrin Cottage, the Five were not expecting an adventure. But they found one – and became involved in a tense running battle underground.

(Okay, that’s not a tagline, but it’s the closest thing this book has to one. Note the absence of Oxford comma, and try to imagine my irritation.)

I know this was one of my favourite Famous Five books when I was young, but for the life of me, I can’t remember why.

I’m also SHOCKED that there was an era in publishing in which someone could write a series book set at Christmas and not mention Christmas in the title or have a Christmas-themed cover. This was published in 1942, and you’d think they’d have pulled out all the stops to play on people’s nostalgia for non-war Christmasses, but no. You can’t tell from the front or back cover that this has anything to do with winter at all. [Dove: That’s very un-Christmassy. To the point where I always forget this one is set over Christmas holidays.] [Raven: I was once Christmas shopping in Leeds, and one shop was playing Sunny Afternoon by the Kinks to fly in the face of the usual jingle bell fare. Loved it, it’s now part of my Christmas Song Rotation.]

[Wing: I am utterly charmed by this one, too! It’s not quite as fun as the first book, but I love George so, so much.]

END_OF_DOCUMENT_TOKEN_TO_BE_REPLACED 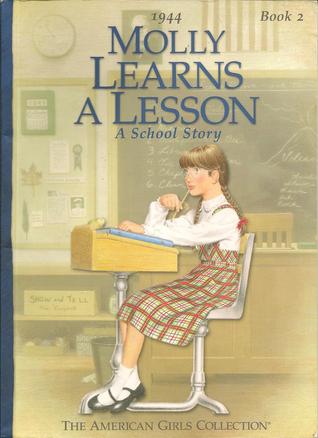 Title: Molly Learns A Lesson, a.k.a. “A Lesson In Te-Am Work”

Summary: Molly is determined that the third-grade girls will win her school’s Lend-A-Hand Contest to help the war effort. Instead, they choose an idea that Molly knows will never work out. So she talks two friends into planning their own project and keeping it a secret from the rest of the girls in the class. But the secret project turns out to be harder than Molly thought it would be. She begins to worry that it might not win after all and decides to spy on the other girls to see how they are doing. When Molly and her friends get caught peeking in a window, they learn some important lessons.

Here’s our second foray into the world of Molly. I can safely say there’s no underwear or cultural appropriation in this one, but it’s probably gonna leave you craving bread.

[Wing: There’s something off about her face on that cover, but I’m not sure what. Proportions? Location of eyes? If you figure it out, dear readers, let me know.]

END_OF_DOCUMENT_TOKEN_TO_BE_REPLACED

Summary: Don’t Go In The Water!

Marc and his twin sister, Terri, are excited about spending the summer at their uncle Nicholas’s lake house. Even though their uncle is an old grouch, Marc and Terri enjoy the lake and their summer friends in Grove Hill.

But this summer is different. Suddenly the once placid lake has motorboats, fishermen, and crowds. Even worse is the gross green slime that’s been popping up on boats and docks and swimmers. When Terri goes for a swim and doesn’t return, Marc wonders what exactly is lurking under the water…

Hey Wing, so a little good news/bad news for you. The bad news is this book doesn’t have werewolves. The good news is it’s got your other favorite thing, twins!

(Terri and Marc by zackdoesalotofstuff)

[Wing: I think you may be overestimating my excitement for twins at this point, thanks to Sweet Valley, but Terri and Marc are super cute!]

This is the first and only book in the series to have twins as the main characters, and it’s also one of the books that heavily feature a message about environmentalism.

Slime Lake was previously referred to in the last book, “Camp Dracula,” but now we’re gonna find out just how gross it really is!

Wing, Raven and Dove talk about Sweet Valley Twins 43: Elizabeth’s First Kiss. They also discuss Bleak Valley and how the book ties into this theory.

Music is provided by Stuart Taylor, who can be contacted on taylorstuart602@gmail.com if you wish to commission music.

Summary: Alisa and her former FBI partner, Joel, learn of a government plan to capture them in order to steal and analyze their vampire blood for the purpose of duplicating it, and when Joel is caught, Alisa risks her life to free him.

Tagline: This time the world hunted her…

I remember nothing about this book. I know I’ve read it. I’ve probably even read it multiple times, though not since my early 20s, if not even before that. But I have no idea what the plot is here, or even who, besides Alisa, is around.

ALISA NEVER GONNA DIE BECAUSE I’M GODDAMN PERNE IS BACK.